This hunt was a year in the making.  The time, effort, cost, scouting, and follow through made this the toughest and most rewarding hunts I have had the pleasure on being on.

Preparation for this hunt began Nov of 2018 when myself and two brothers in law decided we should try and do a hunt together each year.  Neither Luke or Travis had been in the backcountry of the rocky mountains so we opted for that style of hunt and the planning began (unfortunately Luke ended up not being able to make it).

Stone Sheep and Mountain Goat were on the hunting menu as we began to discuss what location we would be heading into.  I personally have hunted in the very northern parts of BC for the last 6 years and developed a bit of

an understanding of the area and animals locations.  Google Earth was an excellent tool for the initial location scouting (ref other blog) and determining a route that we would be able to hike into the backcountry.

Over the course of the year, Travis and I spent many hours on the phone discussing hunting strategy, gear purchases, packing strategy and travel itinerary.  We chose Aug 31 – Sept. 6 as our hunting dates of choice.  This allowed us to ensure goat season was open and it was before opening elk in that region.  This helped avoid a lot of additional foot traffic and hunters would be moving in for elk season. 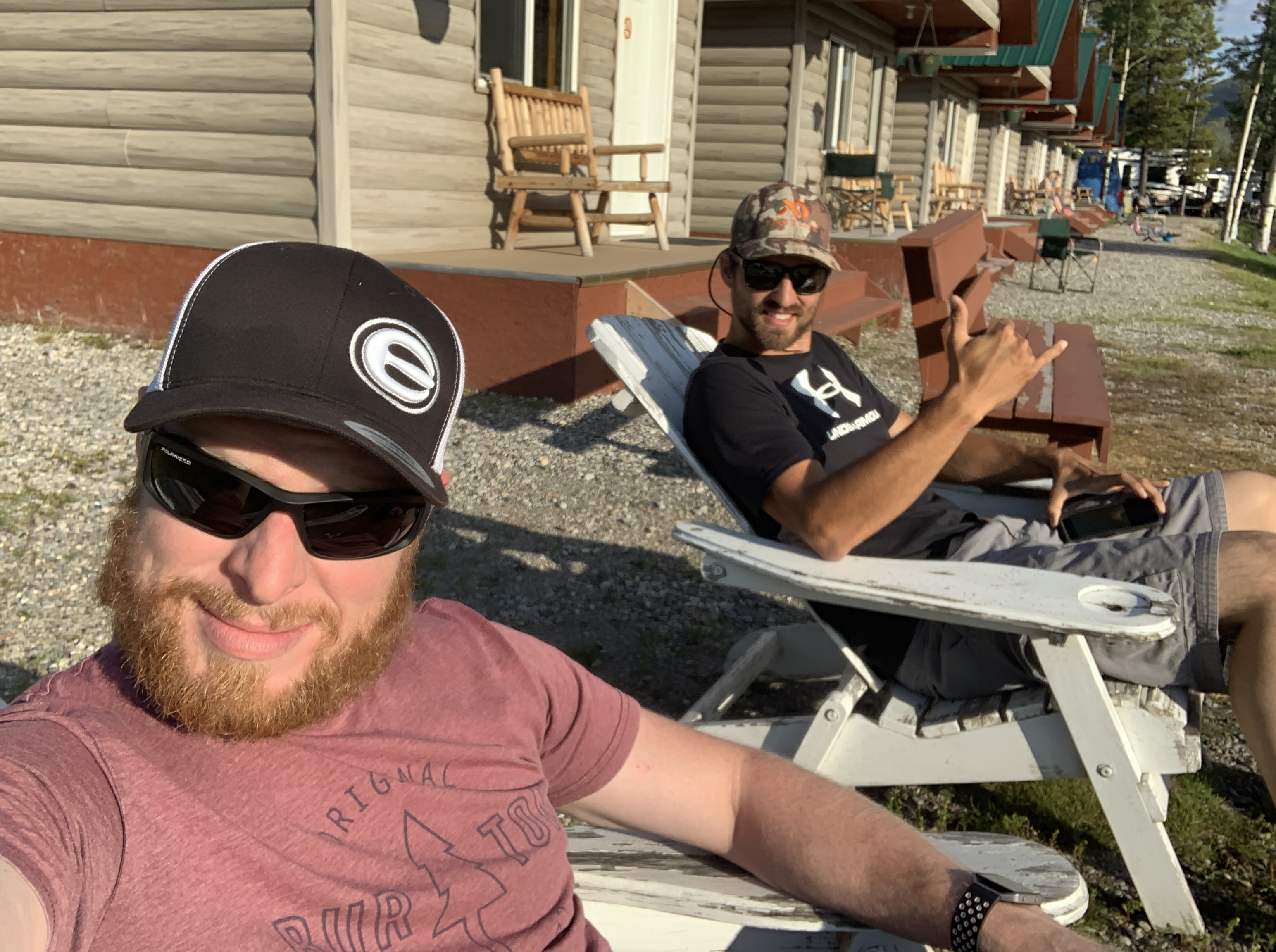 Aug 31 had arrived and it was time to hit the road to our first night’s stop in Toad River, BC. If you are ever traveling on the Alaska Highway and get a chance to stay at the Toad River Lodge, I would highly recommend it; it’s affordable, clean, and a beautiful location. Once in Toad River, Travis and I had a great meal and hit the hay in anticipation that tomorrow we would be heading up our decided route into what we hoped would be an excellent hunting area.

*remember, to this point, neither of us had gone into this specific location and was hoping that my knowledge of the general area along with the many angles of Google Earth we looked at would end up be a reasonable access into the drainage.

Travis and I awoke to a low cloud, cool day in Toad River and I was thankful we didn’t have to fly anywhere being socked in like this. We had a quick and tasty breakfast at the lodge and hit to road. Our plan was to get to our parking destination and give ourselves all day to hike up and into the saddle. In my experience, use all the daylight to can when you are hiking in and out of your mountain hunting destination. The weather, terrain, and other unknown factors are impossible to predict and you don’t want to get caught out of position in the backcountry.

As we pulled off the highway to travel a short distance to our final parking spot, we immediately were met with our first road block. The road that I had once traveled down a few years back was now deactivated and all the culverts had been removed. Looks like our first day of 6.5km had turned into 8kms. Not a hug deal, but unexpected. We both strapped on our packs, and we began our journey to the top of the saddle.

Because we had all day, we took advantage of many breaks, taking our packs off, resting, glassing, hydrating, and have a few laughs. The route was about what I expected. The creek bed was passible all the way to the treeline, and then we peeled off and found a game trail that took us all the way to the top. Total trip time was about 6 hours.

I suggested we drop our packs, grab our spotting scopes and crest over the saddle and glass into the bowl for the afternoon. The weather was great and we could set up camp later. As we crested the ridge, Travis hit the deck and motioned for me to do the same. SHEEP! Travis pointed our a herd of sheep feeding directly towards us. I carefully pulled out my spotting scope to get a closer look. Unfortunately there weren’t any rams in the herd, but a great way to christen our 7 days trip!

The night was miserable, relentless wind created a noise that was incredibly loud and made it impossible to sleep. (If I never hear a tarp in the wind again, it will be too soon ha ha!) So after an intermittent night of sleep, we were up at first light and out of the tent to scout the bowl below

our camp. We glassed until lunch, after which I had a much needed nap while Travis went out glassing. I joined him approx. 2pm and we glassed until dinner, seeing only a cow and calf caribou work their way through the shale below. It was dinner time about 5pm and the sun had decided to grace us with its presence and it was an much appreciated mood boost! After dinner, we used the sunny weather and headed out to do some evening scouting.

It was mere minutes after sitting down that Travis spotted a mountain goat clear across the bowl. Like I mean ALL THE WAY ACROSS AT THE FURTHEST POINT FROM US. I thought we have to go get it. I told Travis “bird in the hand man, let’s do this”. We had about 2.5 hours of light left and a solid push down our ridge and across the bowl to try and cut the billy off.

Off we went. Travis and I pushed hard down a shale slide and began making our way across the lower part of the bowl, hoping we would rise up the other side and cut off the billy goat and get a shot. As we crossed about the two thirds of the bowl, I spotted the billy on a cliff edge on a short rise in the middle of the bowl. The billy had spotted us, but did not spook. We hit the deck behind a small hill and crawled our way to the top and peered towards to the billy. He stood so majestic on the top of that cliff ridge. The billy decided to bed down right there, facing us, which gave us no shot. The billy was at 300 yards on the nose, and with dark approaching on us in about 90 minutes, we knew we were faced with a time sensitive situation.

At the last light opportunity, the billy stood up and began walking down the cliff face. Travis was poised for the shot as soon as the billy stopped. I was glued to my binoculars instructing Travis as the billy traversed the cliff face. As soon as the billy stopped, Travis drove that Hornady 145 grain ELDX down range and tagged the billy hard. Because of the crosswind and looking at the billy, I felt that Travis may have hit the billy a little bit far back. Travis sent another round and it splashed just under the goat. I told Travis to reload and wait. I could tell the billy was hurting and would most likely bed down. Sure enough, the billy laid down, broadside, in the middle of the cliff. I told Travis to hammer him one more time, which was the final blow as the billy tumbled to the bottom. WE JUST TAGGED A MOUNTAIN GOAT! With light fading, we caped the goat out, loaded out packs and booked it back to base camp, getting back right at dark. What a day.

Now with Travis punching his tag, we knew we had shortened our hunt to just 2-2.5 days to make sure we got the meat out. We were up at first light, after some rain in the night, the skies had cleared and we were on the trail into another drainage for the day. We managed to hook up on a decent game trail that took us right down through the bowl below our camp and around the corner into the next drainage. Once we rounded the corner, we found a great glassing spot and stayed there for a couple hours. Not spotting anything, we moved further into the drainage to discover a beautiful crystal clear lake surrounded by jagged cliff faces.

With the afternoon turning into evening, we decided to head back to camp. It was a good thing too. As we were about 1km from camp it began to rain, and by the time we reach camp it felt like we were in the middle of a monsoon. It rained hard until dark, and then the stars came out and we had the calmest and clearest night yet. I thought, day 4 is going to be good.

What a great night! The wind had completely calmed and we both managed to get a full night sleep. It was too good to be true. Mere minutes after my alarm went off at 5am, the faint sound of rain began to spit on the tent. The spit turned into full on rain. Travis and I decided this was our que to pack up and get off the mountain. The weather seemed to be turning and we needed to get Travis’s goat out and taken care of. It was bitter sweet, our hunt was over, but it was so much of a success in so many ways!All of our gear was thankfully under our tarp awning and dry. After packing everything up, the only wet items we had were the tent and tarp, then we made it down to our meat stash, that was also under a tarp, and that was the last item. With heavy packs, we began to make our way down the mountain. We had all day to get back to the truck. We left camp about 7am and made it to the truck at noon. The hot springs were calling after a long hike out, so after a lunch at Muncho Lake Lodge, we hit Liard Hot Springs

for a couple hours before heading back on our way south, stopping in Fort Nelson, BC for the night. It was a long day and getting to sleep in a real bed felt like winning the lottery.

We made it home the next morning before lunch and it was definitely nice to get home and see the family. Travis and I headed to the taxidermist to get his goat inspected (as per provincial regulation) and have the cape salted, before their journey back to Kamloops.

How do I even sum up a hunt like this? The great time my brother in-law and I had on our first hunt together, the fact that this hunt was entirely DIY, the fact that we actually tagged out on an animal that most people spend countless years chasing and aren’t successful, the amazing beauty of God’s creation, there’s simply too much to list of how this hunt exceeded our expectations. My advice is, if you have a dream hunt, make it happen, plan it out and go for it.